The weightless world of Marc Chagall 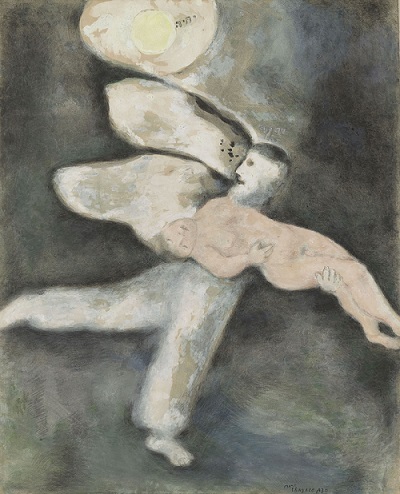 THE WEIGHTLESS WORLD OF MARC CHAGALL

Marc Chagall's work is characterised by abundant human, animal and hybrid forms that seem to defy the laws of gravity. Whether floating or lightly undulating on the breeze, his creatures invade the whole canvas. The new display of the museum's collections examines this unique and complex world within the greater context of modern art in a bid to better understand the significance behind Chagall's approach to weightlessness.

The upside-down, topsy-turvy universe that Chagall creates seems to speak directly to our own imaginations, our ability to project and use his paintings as a springboard towards a world reinvented where everything becomes possible and our own creativity, inventiveness and curiosity flourish. Figures that twirl in the air are also an expression of explosive emotion: indescribable love both earthly and mystical, spiritual trance and disorientation in the face of the world's inherent violence. Drawing on his pantheistic approach to the universe, Chagall plucked living beings from their natural environments, whether sea, land or sky, thus deconstructing hierarchies and species classification, preferring instead to unite them around the common theme of life.

Chagall's ubiquitous angels are given pride of place in this thematic presentation of the collection: sometimes a sensitive expression of God Himself, more often than not the artist's angels are depicted as messengers. Intermediary creatures bridging both earthly and celestial planes, angels embody divine will and word, protecting, inspiring and punishing by turn. The expressiveness of their gestures, postures and attributes set the tone and lend meaning to the different scenes. Chagall's many « angel-painters » are considered self-portraits, in which the artist is a messenger, and his work a source of peace and hope.

prices: €10, €8 concession, groups €8.50 (minimum 10 people) including the collections. Free admission for under 18s, under 26s (EU members), disabled visitors (MDPH or Cotorep card), teachers (current Pass Education), those qualifying for certain types of income support and for everyone on the 1st Sunday of the month