27 May - 28 August 2017
Musée national Marc Chagall
An exhibition organised by the Réunion des musées nationaux - Grand Palais and the National Museums of the XXth Century of Alpes-Maritimes at the Marc Chagall National Museum, Nice. Project initiated by Curators Inc. Art & Architecture for the Tokyo Station Gallery, the Nagoya City Art Museum and the Aomori Museum. 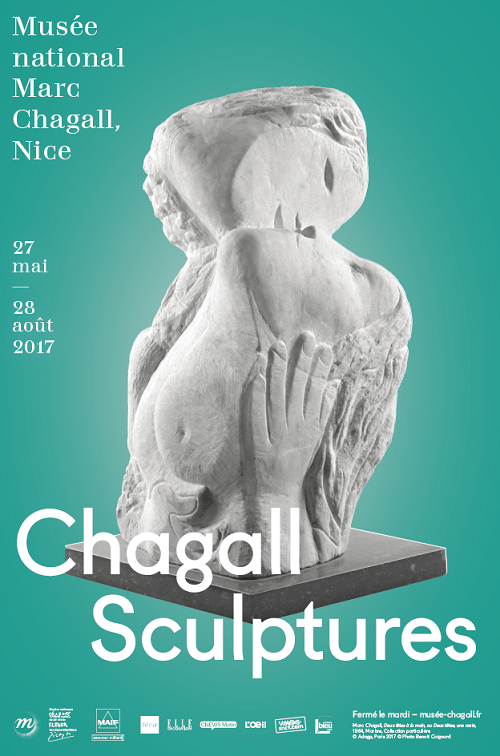 Throughout his life, the inventive genius of Marc Chagall (1887-1985) pushed him to explore highly varied artistic techniques, including drawing, painting, engraving, ceramics, mosaics, stained-glass and tapestry. This wide range also includes one of the artist's practices of which the general public is still largely unaware – sculpture. With the exception of L'Épaisseur des rêves (The Thickness of Dreams) displayed at Roubaix in 2012 at the Piscine-Musée d’art et d’industrie André Diligent, very few exhibitions have been dedicated to this subject. The Marc Chagall National Museum, whose collection houses five exceptional carved stones, has chosen to reveal this still little-known aspect of the artist's work in summer 2017.

Marc Chagall discovered the practice of sculpture in 1949 when he moved to Vence, on the Côte d'Azur. The artist's first foray into volume was modelling, creating ceramics in various different workshops around the region, including the Madoura studio in Vallauris. Entranced by the region's wealth in terms of earth and rock, which reflect all shades of Mediterranean light, Chagall began earnestly carving stone. He delighted in using Rognes stone, a Provençal material with fragments of yellow shells (Moïse, 1952-1954), as well as marble (Deux têtes, une main, 1964). For some of his pieces the artist used the prestigious Susse foundry to produce them in bronze, working as a painter on the patina and with an engraver's approach to the reliefs and volumes of the metal work (La Bête fantastique, 1959-1960). The exploration of new materials through sculpture and ceramics lasted some thirty years, fuelling, enriching and renewing his approach to painting by revisiting the material.

In total, Marc Chagall created almost a hundred pieces on the themes dear to his heart: a celebration of love, animal representations and biblical scenes. The exhibition will enable visitors to discover some sixty of them and will also include copper and engraved wood pieces (the copper etching and drypoint of La Bible, 1931-1956; the engraved wood of Poèmes, 1968), as well as previously unseen collages that attests to the artist's constant research into the subject of volume. There is no doubt that his experience as an engraver helped him to create reliefs (Deux oiseaux et un lapin or La Colline, 1966) and engraved tablets, in particular the headstones of his friend, the Russian writer Assia Lassaigne (1950) and his wife Bella Rosenfeld (1965).

The pieces of sculpture presented in the exhibition reveal the infinite diversity of Chagall’s sources of inspiration. Here, forms with prehistoric accents appear on objects taken from nature – pebbles, bones – whose half-human, half-animal silhouettes are brought to life by the very free drawing style of Chagall (Visage double-profil, vers 1957). Here, the vocabulary of columns and medieval capitals is employed in the delicate bas-reliefs of primordial couples (Deux nus ou Adam et Eve, 1953). Finally, other sculptures demonstrate the influence of Russian cultural, spiritual and popular iconography, particularly visible fantastical animal pieces that he constantly returned to (Le Coq, 1952).

Gifted with a keen sense of spatiality and scale, Chagall’s sculptures have also appeared in projects dedicated specifically to architecture, whether religious or civil. The works created for the church of Notre-Dame-de-Toute-Grâce on the Assy plateau (La Biche and L’Oiseau, 1957) or for the inner courtyard of Ira Kostelitz’s private mansion in Paris (Oiseau et Poisson, 1964 -1966) – known as the Cour Chagall or Chagall Courtyard, which has today become part of the park of the Fondation Gianadda in Martigny, Switzerland – will be therefore presented for the first time in Nice, unveiling a new aspect of the artist’s work bathed in the Mediterranean light of the Musée National Marc Chagall. 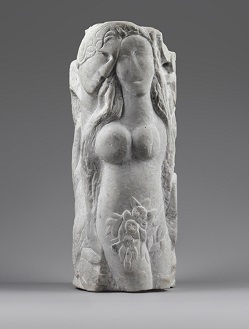 opening hours: every day except tuesday from 10am to 6pm prices: €10, €8 concession, groups €8.50 (minimum 10 people) including the collections. Free admission for under 18s, under 26s (EU members), disabled visitors (MDPH or Cotorep card), teachers (current Pass Education), those qualifying for certain types of income support and for everyone on the 1st Sunday of the month