A Contemporary Odyssey in the exhibition "In the Land of the Gods. Marc Chagall and the Greek World"

Left To Their Own Fate (Odyssey)

Video-projection in the exhibition "In the Land of the Gods. Marc Chagall and the Greek World" 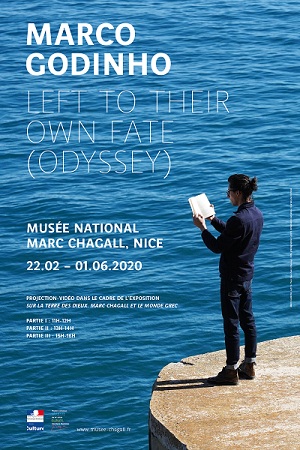 As an extension of the exhibition “In the Land of the Gods, Marc Chagall and the Greek World", the national museum Marc Chagall presents the film Left To Their Own Fate (Odyssey) by Marco Godihno, produced in 2019 for the Luxembourg pavilion at the 58th Venice Biennale.

This film, a contemporary Odyssey, is composed of three parts, each lasting one hour, and recounts a journey of initiation at the heart of the Mediterranean: a return to the South, to the birthplace of Greek poet Homer’s founding stories, counter to modern migratory patterns. From the border cities of Straits of Gibraltar, to the lagoon landscapes of Venetia, via the island of Djerba and the historic cities of Tunisia, the artist films a young man reading in a low voice the Homeric poem, The Odyssey, then tearing the pages to present them to wind or sea. This continuous reading experience, which anchors itself in each location, embodies for the artist a gesture of offering, a sign of hospitality towards the other.

A tribute to the ghostly bodies that disappeared in the Mediterranean Sea, these "migrating pages" also open up to the All-World *: an ever-changing space where identities, languages and cultures intertwine and crossbreed. As the adventurer Ulysses, who comes back home as a foreigner, the artist suggests that the feeling of belonging to one’s native land is created by distance, and by one’s ability of stay curious and available to what surrounds you.

Born in 1978 in Salvaterra de Magos in Portugal, Marco Godihno lives in Luxembourg. A tireless traveler, he develops a complex work nourished by literature, philosophy and multiculturalism. His installations, videos, drawings or participatory projects demonstrate a vision of existence, interweaving with the themes of wandering, memory, geography and, more broadly the experience of time and space.