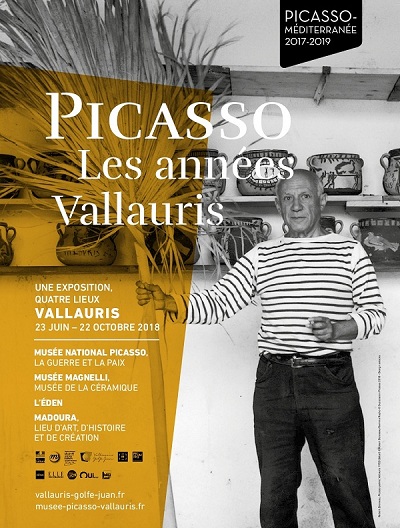 The exhibition «Picasso, les années Vallauris» organised under the «Picasso-Méditerranée» project makes a foray into the heart of Vallauris, in the places where the painter lived and worked from 1947 to 1955 from the time he settled in the Provençal city’s «La Galloise» villa until his departure for Cannes.

Following the tragic years of war, the Vallauris sojourn was an era of family bliss for Picasso. Surrounded by his companion, Françoise Gilot, and their two children, Claude and Paloma, the artist attracted a circle of artists and writers, including Edouard Pignon, Jean Cocteau, Jacques Prévert and Paul Eluard. Fully engaged in the Vallauris community, Picasso injected new energy, inspired festive events such as bullfights and music parades, while pursuing his political activism in the Movement for Peace and the French Communist Party.

Looking at Picasso’s works, his Vallauris years were marked by an extremely fertile artistic creativity that was kept alight by regular ceramic productions in the Madoura workshop. Picasso equally engaged in new technical and iconographic experiments by playing with this traditional craftsmanship to the point of reinventing its codes of practice. In the meantime, he ventured into sculpture, putting together recycled materials and repurposed everyday items, and also linocutting.

Designed as a series of back and forth journeys between everyday life and Picasso’s art works, the exhibition showcases the extremely innovative dimension of his work during this period and highlights the Spanish master’s attachment to the town. By offering the «L’Homme au mouton» statue to Vallauris and painting the monumental La Guerre et la Paix paintings in the chapel of the old priory, Picasso infused power and universality into his Vallauris works.

His refreshed creative freedom is showcased in the exhibition by some three hundred works, thanks to support from the Musée national Picasso in Paris. This impressive collection of paintings, drawings, sculptures and ceramics is enhanced by numerous documents, including archives, photographs, preparatory drawings, interviews with local personalities close to the artist, and supplemented by a tour of the city that depicts its social, economic and artistic evolution.

For the very first time, the exhibition presents a panorama of those prolific years. It will be showcased in several heritage sites across the city (Musée national Pablo Picasso: La Guerre et la Paix; Musée Magnelli: Ceramics museum; Madoura: Home of Art, History and Creativity; and the former Cinéma l’Éden). An ideal opportunity to see (again) Picasso’s works at Vallauris in the very places they were created.

During the exhibition "Picasso's Vallauris years" :
One common ticket for the 4 sites of this exhibition
Full rate : 10 €
Reduced rate : 6,50 € (students, older people, group rate apart from 10 people)
Free for under-26s (EU) and for all on the first Sunday of every month.