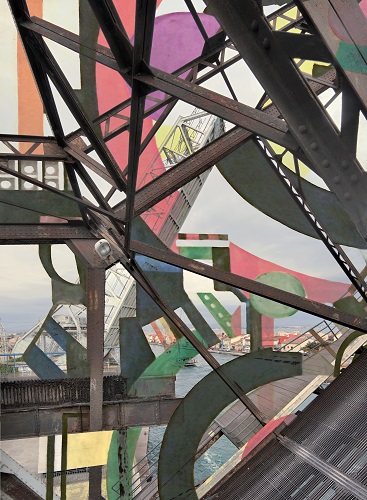 On a regular base, the National Museums of the 20th Century of the Alpes-Maritimes invite contemporary artists to exhibit or create works in the context of exhibitions designed to complement the collections and the museum sites.

In 2018, the National Fernand Léger Museum wished to highlight the rich thematic and visual connections between the painting of Fernand Léger (1881-1955), an avant-garde pioneer of the first half of the 20th century, and the photographic work of Stéphane Couturier, a French artist, born in 1957.

Stéphane Couturier's encounter with the painter’s work gave rise to the creation of original photographs, inspired by the museum's collection: Stéphane Couturier chose the painting entitled Le Grand Remorqueur (The Big Tugboat), an industrial landscape on the banks of the Seine painted by Fernand Léger in 1923, as the starting point for new views for the photographer, taken in the town of Sète in the autumn of 2017.

The exhibition also presents previous works by Stéphane Couturier, which establish an in-situ dialogue with the paintings of Fernand Léger. The two artists share the same fascination for the profound changes in the city, a common interest in the labour world, industrial aesthetics and modern architecture, particularly that of Le Corbusier. But while Fernand Léger, after the Second World War, expresses his faith in progress, modernity and reconstruction, Stéphane Couturier documented, from the 1990s, the progressive disappearance of industrial society and the transformation of urban space, in the world’s major cities (Paris, Berlin, Seoul, Brasilia, Salvador da Bahia, Algiers).

In his new series, designed to echo the work of Léger, Stéphane Couturier superimposes several digital photographs, a technique he first used in his Melting Point series in 2004. The artist creates a hybrid reality, starting from the fusion of two or three images. This synthesis between two realities produces a multitude of details, where the viewer's eye becomes lost and causes an impression of movement and the dissolution of the subject, within a monumental composition.

Today, the photographic work of Stéphane Couturier, playing with the digital tool’s infinite possibilities, combines a documentary approach with a complex treatment of the composition. As in a Cubist painting, he draws from the real, fragments it and, thanks to the rhythm and contrast between lines, shapes and coloured planes, goes beyond it to offer a new perception.

Stéphane Couturier thus questions the allegedly objective nature of the photographic medium: the image becomes a material. From this material, a machine to construct a combination of shapes which continuously updates the recorded reality is born.