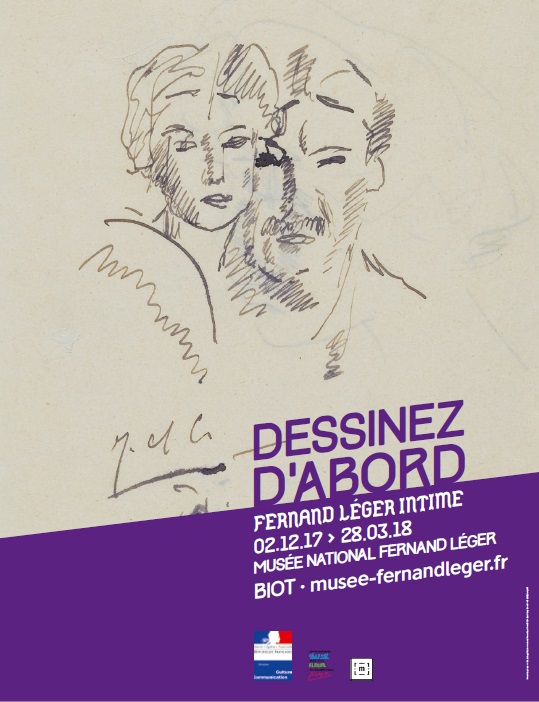 The painter, Fernand Léger, taught the art of drawing at his Academie Moderne as an indispensable prerequisite to painting. “Draw first,” he told his

students. “A precise drawing, with lines, nothing but lines. Fragments first: hands, feet, then figures, and then compositions of the whole…”

adjusts his composition, studies the position of the figures, or models the effects of light and of colored contrasts. Drawing enables Léger to

concentrate on the form which he seizes in its essence. He then progressively introduces color with touches of gouache or watercolor which

illuminate the paper surface with their brightness.

collection. For him, drawing is not simply an intellectual exercise in the analysis and synthesis of form destined to be brought to fruition in a painting.

It is also a means of artistic expression in and of itself which Léger practices daily. Drawing reveals the intimate side of the artist, both by the

subjects represented – caricatures of friends, portraits of his beloved – and by the modest formats and techniques.

Drawing reveals a personal, and often moving, dimension to the work of Fernand Léger as seen in the rigorous and sober 1930 Self Portrait. The lively

and precise line work reflects the artistic curiosity of the painter as well as the emotional richness and freedom of his eye.

This winter exhibition presented by the National Fernand Léger Museum focuses on the 1921-1925 period. It is articulated around four major themes

Léger’s work as well as the evolution of his artistic work during the first half of his career.

opening hours: every day except tuesday from 10 am to 5 pm prices: €7,50, €6 concession, groups €7 (minimum 10 people) including the collections. Free admission for under 18s, under 26s (EU members), disabled visitors (MDPH or Cotorep card), teachers (current Pass Education), those qualifying for certain types of income support and for everyone on the 1st Sunday of the month