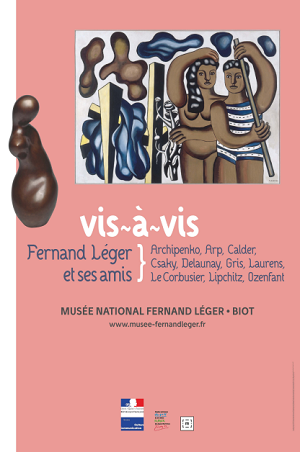 An independent soul in both his life and art, Fernand Léger (1881-1955) had his finger firmly on the pulse
of the times. Throughout his career, he forged ties with his contemporaries and nurtured a deep curiosity
for the work of the painters, sculptors, poets and architects around him.

This exhibition is part of a broader initiative running throughout 2017 in celebration of Fernand Léger's
work, with the Centre Pompidou - Metz showcasing a large-scale retrospective from 20 May to 30
October 2017 entitled "Fernand Léger: Beauty everywhere", in a tribute to the painter's multi-faceted
personality and life. For the retrospective exhibition in Metz, organised in celebration of the Centre
Pompidou's 40th anniversary, the Musée National Fernand Léger agreed to an exceptional loan of
numerous masterpieces such as Les Toits de Paris (Roofs in Paris, 1912) and the iconic Les Constructeurs,
définitif (Construction Workers, Final State, 1950) painting.

Opening hours Every day, from 10 a.m. to 5 p.m., from November to April; and from 10 a.m. to 6 p.m. from May to October. Closed on Tuesdays, December 25th, January 1st, May 1st Ticket prices Admission includes access to the permanent collection and an audio guide (available in French, English, Italian, German, Russian, Japanese and Chinese, ID required). €7.50, reduced rate €6, groups €7 (groups of 10 or more) including the permanent collection for the duration of the exhibition Free for under-26s (European Union citizens), visitors with a disability (MDPH disability card) and teachers. Free admission for all, every first Sunday of the month.