The Marc Chagall National Museum in Nice, whose construction project was carried out by the architect André Hermant, in close collaboration with the artist, was inaugurated on 7 July 1973. This establishment, presenting one of the most important collections of Marc Chagall's works, was awarded the label of Remarkable Contemporary Architecture on 28 November 2000. 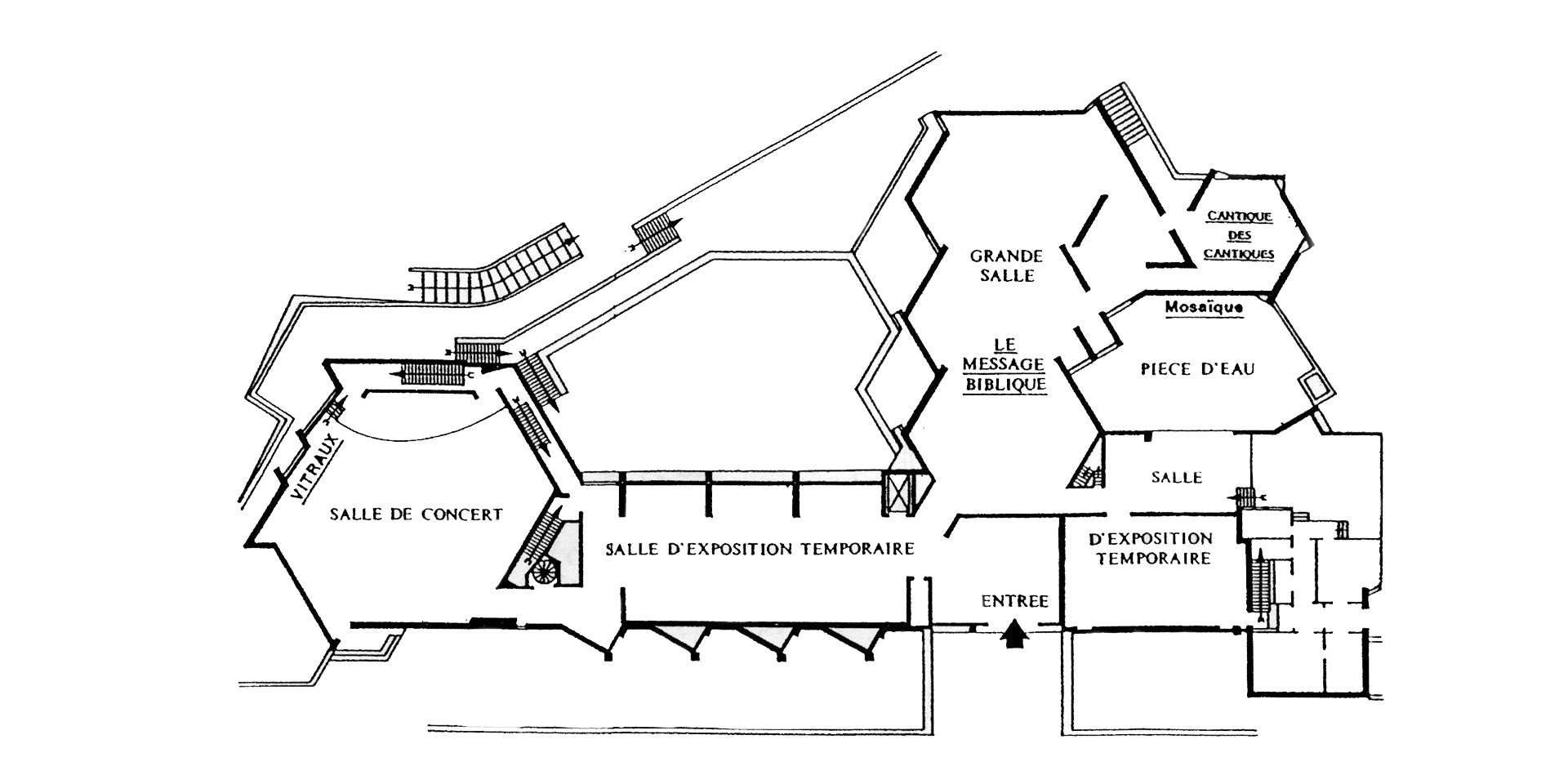 Genesis of the museum

"I would also like this place to display works of art and documents of high spirituality from all peoples, to hear their music and poetry guided by the heart. With this in mind, the 80-year-old Marc Chagall donated a large number of works to the state in 1966 and 1972, with the support of André Malraux, for the construction of a museum.

The architect André Hermant (1908-1978) was chosen to carry out this project. He graduated from the École spéciale d'architecture in 1933, was a former collaborator of Auguste Perret and Le Corbusier, and was a member of the UAM (Union des Artistes Modernes). In the 1950s, he was one of the first architects to work on redefining the architecture of museums in France. In Nice, true to his convictions, he proposed a sober and functional building: a great rigour seemed necessary to him in order to respond to the museographic constraints, while keeping the discretion necessary for a good presentation of the works.

Built in the Cimiez district, on a vast plot of land donated by the city of Nice, the building was inaugurated in 1973.
Designed to house a permanent collection, the building adopts a sober and clear rectangular layout and is divided into two perpendicular sections. The first longitudinal wing, running east-west, houses the technical rooms, the permanent exhibition and the auditorium. The second wing, extending southwards, highlights the 12 paintings illustrating Genesis and Exodus, in the heart of larger spaces composed like interlocking rhombuses.

Marc Chagall, who supervised the entire project, wanted the project to be centred around his series of paintings entitled The Biblical Message, and for the place to be spiritually charged. To this end, the lighting, which was supposed to be zenithal according to the architect's initial plans, is finally lateral, even oblique, in order to highlight the paintings and their relief. The artist also created some of the decorations himself, such as the stained glass windows in the auditorium (in collaboration with Charles Marcq), and the mosaic that enlivens the entire museum (in collaboration with Lino Melano).

On the façade, the veneer of La Turbie stone and the aluminium-silicon lintels and fascias give the building a discreet, matt appearance. Built on one level, the museum quickly blended in with the vegetation chosen and designed by landscape architect Henri Fisch during the project phase, and composed of cool-toned Mediterranean species, as Marc Chagall had wanted. Several ponds also provide freshness and contribute to the atmosphere desired by the artist.

After Chagall's death in 1985, following the dation of the heirs (1987) and an important acquisition policy, the place became a monographic museum in memory of the painter and since 2008 has been called the Marc Chagall National Museum. Two major renovation campaigns, in 2007 and 2018, have enabled the creation of reception areas, the addition of scenographic equipment and the upgrading of accessibility standards.

What is the "Outstanding Contemporary Architecture" label?

The "Remarkable Contemporary Architecture" label was created by the law of 7 July 2016 on the freedom of creation, architecture and heritage. This label replaces the "20th Century Heritage" label, created in 1999 and now defunct. It indicates buildings and productions less than 100 years old that are not protected as historical monuments.
The objective is to show the interest of recent constructions that everyone can live in and visit, to make the link between the old heritage and the current architectural production, to encourage their reuse by adapting them to the expectations of the citizen (ecological, memorial, societal, economic...).

For more information on the label, please visit the Ministry of Culture website

To discover a digital version of the 2014 exhibition entitled "The Chagall Museum. Masterpiece of André Hermant", organised on the occasion of the 40th anniversary of the construction of the museum, please consult the website of the Cité de l'Architecture